April 30th, 2016. The annual meeting was held at the Wilkerson Student Center @ BYU. Our president Randy Hill opened the meeting with Trust...

Here's an article about a woman who thinks diversity in an associaiton is a good thing--she's using dinosaurs to prove her point--now she'll get fined and punished! Want to make a bet?

I think we have some dinosaurs in our POA.. read the story below.

HOA, homeowner at odds over dinosaur display | Fort Bend Southwest Star Newspaper: "Not everyone is happy about the dinosaurs, though. There has been some push back from the community – namely, the New Territory Residential Community Association. The area HOA wants the dinosaurs gone.
Hentschel said she brought them in knowing that they would not be uniform – a quality she believes the HOA wants homeowners to abide.
Her view is that uniformity and conformity do not add value to a community; people add value to a community. She thinks people together, can do great things for the community. And the people who have spoken to her understand the concept of community and want it."

'via Blog this'
Posted by Hideaway Blog at 10:15 AM No comments:

Fight for your rights lost in HOA-Land | HOA Constitutional Government 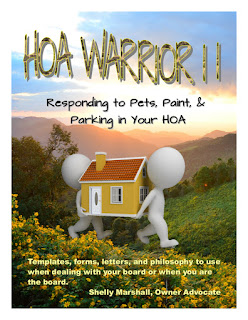 'via Blog this'
Posted by Hideaway Blog at 8:14 PM No comments:

Great article on anHOA board gone amuck--they wasted sooo much money on fighting a family about a swing set! The insanity of little people with lots of power only grows worse. I am glad the judge saw it this way--the neighbors, suppsedly the ones the board was protecting, threw a BBQ for the family when they won the right to keep the swing set!

Judge rejects HOA's attempt to impose fines and jail time over backyard swingset: "A Missouri family, whose homeowners' association board threatened them with fines and even jailtime over their daughters' backyard swingset, won a legal victory last Friday after a judge ruled that the playset can stay.

Or, if you prefer: on Friday, a judge dealt a devastating legal blow to an embattled Missouri homeowners' association board that was only trying to protect itself from the dire threat posed by a children's backyard swingset.

Legal battle
Jack and Marla Stout live in the Raintree Lake subdivision, located in the Kansas City suburb of Lee's Summit, Missouri. Two years ago they installed a backyard playset for their two young daughters. The girls wanted to paint the playset pink, but they settled for purple. Marla Stout told KMBC-TV on Aug. 10 that she bought and applied a purple-tinted wood stain at Home Depot."

'via Blog this'
Posted by Hideaway Blog at 9:59 PM No comments: